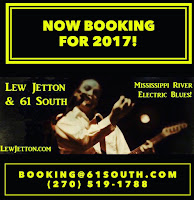 Booking is going well for 2017.  Looks like we could wind up at some festivals we've never played and in some different regions!  Part of that is we're actively pursuing playing other parts of the country and yes, possibly even overseas, and part of it is the success of our album, Rain, which as of this week is STILL on the RMR charts (25 weeks straight and counting).

In the meantime, we're getting ready to begin recording the NEXT album, and I'm really excited about the project.  It will be quite a departure from the first three CDs in that it will be much more stripped down, and actually quite dark, but it was actually very therapeutic to write about some of the dark times I've gone through over the past 10 years, since the 2006 CD, Tales From A 2 Lane.  More about that later.

In the meantime, if you or your festival would like to book us this coming year, better act fast!  I only play a limited live schedule throughout the year!
Posted by Lew Jetton at 7:20 AM