1 Wedding, & a Funeral, and a little Blues 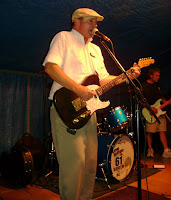 I haven't been able to blog as much lately. It's my busy time of the year. Lot's of gigs and busy with my "day job" too. This time of year, I'm trying to make hay while the sun shines, so I'm usually working both jobs as hard as I can. Sometimes playing on Fridays and/or Saturdays. Sometimes working all day and then playing that night. It's tiring sometimes, but I love it.

I've been to several funerals/visitations this year to say goodbye, and to one wedding. This past weekend, my beautiful niece Jodi's wedding was really nice. I know it was tough in a way, because she lost her dad a few weeks ago. Her dad, Johnny, was a high school friend of mine, who was married to my sister for several years. He was only a couple of years older than me and growing up, I always thought Johnny was the coolest. He definately marched to his own beat. At the reception, Jodi asked my father to "step in" for her late dad for the father-daughter dance. I thought this was so perfect, as we almost lost my dad a few months ago. He fought and fought and rebounded, much to the astonishment of doctors who didn't know him as well as we did. For a long time, I've thought my dad was the coolest too. This just proved it one more time.

Weddings and funerals are symbolically, beginnings and endings, but in many ways, they are both times to celebrate life, and love. In between, we need to celebrate and appreciate life and love, too.
Posted by Lew Jetton at 6:32 PM 1 comment: