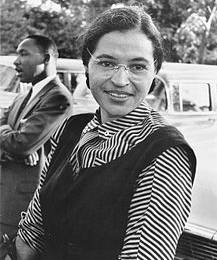 On December 1, 1955, in Montgomery, Alabama, Rosa Parks refused to obey a bus driver's order that she give up her seat in the colored section to a white passenger, after the white section was filled.

Parks' act of defiance and the Montgomery Bus Boycott became important symbols of the modern Civil Rights Movement. She became an international icon of resistance to racial segregation. She organized and collaborated with civil rights leaders, including Edgar Nixon, president of the local chapter of the NAACP; and Dr. Martin Luther King, Jr., a new minister in town who gained national prominence in the civil rights movement.   Listen to her words:
Posted by Lew Jetton at 6:12 AM No comments: