It's almost Festival Season and even with the economy in such bad shape, I'm excited. I know many of the festivals are working on limited budgets this year, but perhaps they'll give everyone a chance to get away for an inexpensive day trip, listen to some great music and forget about the economy for a few hours. It's the same for me. I get to reconnect with old friends, both onstage and off, and listen to some artists who I've never heard and always wanted to hear live!

I'll begin at Alto Vineyards, Saturday May 9th at their Spring Wine Festival. I always love playing at Alto Vineyards, even though it's a long gig (5 hours). Someone once asked me if I could play a certain song there and I responded, "I sure can! In fact, at 5 hours, I'll play everything I know, and several songs I don't know!"

Sunday May 24th, I'll play the Lowertown Arts Festival in Paducah. It's a really unique festival, with all kinds of music. Saturday's lineup is great too with avant garde bluegrass outfit Bawn in the Mash and an artist I've really wanted to see perform, Amy LaVere, from Memphis. She's a very unique talent who has an unforgettable voice and plays upright bass. I'm so thrilled they booked her for the Lowertown Arts Festival, so I'm planning on coming up Saturday to see her set before we play on Sunday.

Friday, May 29th, we'll play in Oak Grove, Kentucky at the Spring Into Summer Festival. It's scheduled at their new amphitheater, and has a lot to do for the whole family. We've never played at the Oak Grove/Ft. Campbell area and look forward to it!

Friday, June 26th, we'll be in East Prairie, Missouri for the Mainstreet Festival, which is held in conjunction with the "Tour de Corn." Oddly enough, my brother, an avid cyclist, has ridden in the Tour de Corn several times and may again this year. I might ride in it this year too, as I love riding, but I don't go very fast! I'm hoping that East Prairie's native son and my buddy, Reid Howell can make it!

Thursday night, August 27th, I'll be back at the Hot August Blues Festival. It's the 20th Anniversary and they've got a good lineup! I'll be especially interested in hearing, for the second time, Eddie Turner, who I heard at the Chicago Blues Festival a few years back, and Lil Dave Thompson. I've seen Reba Russell several times over the years, and she always smokes em. I even remember her from Reba and the Portables in the 80's Memphis music scene! Turner goes way back. In fact, he even took Tommy Bolin's place in the legendary band Zephyr "back in the day."

In September, we'll be at the Cache River Basin Winery for a wine festival, and then September 19th, we'll open for Ronnie McDowell at the Old King Coal Festival in West Frankfort, Illinois. That will be a hoot!

Saturday, September 26th will be a real hoot! BBQ on the River and we'll share a bill with one of the hottest and longest running Blues bands around, The Beat Daddy's. It'll be great to see my buddy Larry and watch them play again. This is gonna be fun! Then it'll be time to take a break, watch some football and eat some wings! It'll be a fun ride!
Posted by Lew Jetton at 3:10 PM No comments:

I still watch American Idol, although I'm terribly busy, what with the quilt show week coming up and all. Here are my favorites and handicap thoughts following "Movie Night":

I love Lil Rounds voice, but she does need to do a better job of making songs "her own." She really needs Melinda Doolittle's "song advisors." She has so much promise, but sadly has gotten worse as the show has gone on. If ever someone needs to get her groove on, it's Lil Rounds, because she has the chops.

Danny is a great singer with a great back story. I'd like to see him do well! I think he has a great voice and does great interpretations! He didn't do great tonight, but everyone stunk it up tonight. He was lukewarm in a sea of ice water. 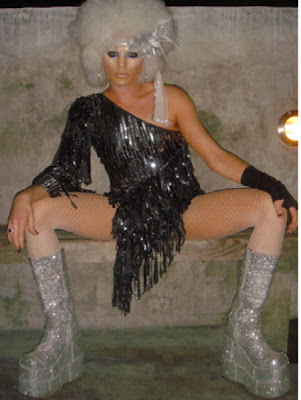 Adam is very dramatic, flamboyant, creative and yes, very gay. Could he be the first flamboyantly gay winner? It will depend on the teenage girls. Will they buy in? Can they "cross over" enough to "the other side?" Cher thinks so! "Ground control to Major Tom?" I'm not so sure, even with his "raging" reviews from the judges.

Matt, the Justin Timberlake clone of the competition is not bad, but is he carving out his own niche? He wants so bad to be a rocker, but his stripes, which he cannot change, are so 'N Sync.

I like Allison, but hate teenagers who have already made more money than I will in my lifetime. Is that so wrong? What a dilemma!


Chris is not bad! I hope he doesn't get voted off. Anoop is terrible. Please, "no mas!" He needs to go.

I must say, "Movie Night" was a tremendous disappointment. I mean, TWO Bryan Adams songs? Even Bridget said, "This makes me want to listen to Metallica." I'll never forget my interview with Peter Fonda, one of the favorites I ever did, when he said how honored he was when he saw where Quentin Tarantino said "Dirty Mary, Crazy Larry" was his all time favorite movie. How sad Quentin must be, that his night, "Movie Night" was such a dud. Even "Vote For The Worst" seems torn. It is a much more clear cut case that David Alan Grier should not have been voted off "Dancing with the Stars" in favor of cocaine aficionado albeit Hall of Famer, Lawrence Taylor. If there was a way, they ALL should be voted off tonight. I'm still waiting for "Blues Night," "Rockabilly Night," "Jazz Night" or even "Sinatra Night."
Posted by Lew Jetton at 4:58 PM No comments:

I have never seen, in person, a tornado, a UFO (well maybe once, but from a distance), Bigfoot or a Black Panther (except for Bobby Seale on TV years ago). That's why it depresses me that members of my own family have seen the elusive black panthers in West Tennessee on more than one occasion. I just might have to make it a mission, because I KNOW they're there!

So far, the only black cat I see regularly is Buckwheat, my pet cat, but even with that one, there are days which go by without sighting the elusive cat, and it's IN MY HOUSE. Buckwheat's a strange cat, but certainly not large or legendary.

Although the Tennessee Wildlife Resources Agency says there's no such thing, others in West Tennessee keep track of the sightings. They're black cats, but much larger than house cats. They're reported to be larger than a mid size dog. There are a few photos of them, but not many. TWRA says they are cryptid.

I don't think so, and I have 2 witnesses in my own family. My brother, an avid bike rider, spotted one in a ditch beside the road one evening, and my little sister spotted one on at least one occasion in a field behind our parents house, near Trenton, TN. I tend to believe my sister on these things since she's a PhD in Zoology. Both said it was no housecat. They're not willing to say it was a puma or mountain lion, or jaguar or leopard, but it was MUCH bigger than a house cat. They said it was slightly larger than a mid-sized dog.

I told both of them to do something I always do: have a camera. I always have a digital camera or a cellphone with camera at all times, just in case I see that darn cat.
Posted by Lew Jetton at 2:58 PM 4 comments: