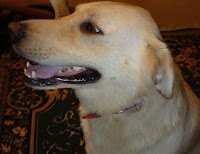 Today I said goodbye to one of the best friends I ever had, my dog Maisy. For the 13 years she was on this earth, she was hard-working, fiercely protective & loyal, quick with a smile and a good listener when I needed to vent.

Bridget and I got Maisy, and her sister, Bessie not long after we moved to Fulton. She was a playful pup who chewed up hundreds of dollars worth of golf bags, pool covers and basically anything left unprotected, but that's what puppies do. Before long though, we realized how smart she was and how much she loved and watched out for us. After Bessie was killed several years ago, it almost seemed like she got even more protective of our (her) house and her loved ones. 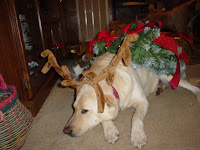 A veterinarian friend once told me that while most Labs were good watch dogs, not many were good guard dogs. He added though, if a Lab ever decides he wants to be a guard dog, he'll be the best guard dog you could ever have. Maisy decided she wanted to be a guard dog. I remember once my father visited to help me fix something in the house and he looked at sweet Maisy and said "that dog won't bite anybody!" As he turned and walked away, Maisy charged and got him right on the behind! After that, He always made sure I was home and to bring a bag of dog biscuits whenever he visited. All the way, from his truck to the door, he would constantly be giving Maisy dog biscuits, until Maisy finally accepted him. Anytime anyone came into the yard, they quickly learned they had to get past Maisy first, and that could not be accomplished until one of us put her in the house, or in her pen. 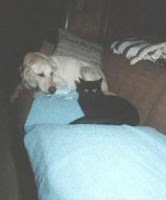 Maisy not only protected us though. She also protected her kitties! When we got kittens, she doted over them, made sure they were always "bathed" and protected them from other animals, including the other dogs. They were her babies and she wouldn't let anything or anyone near them which she felt could harm them. 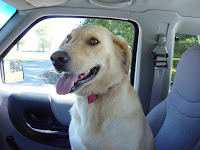 Maisy didn't ask for anything in return, but she loved to ride in my truck with me. Sometimes I would let her ride shotgun when I went to town to run errands and she loved it. Of course, she would growl if anyone got too close (she LOVED to growl), but most of the time her eyes were lit up with excitment as she watched the passing terrain. She loved riding with me more than anything else. When she was younger, she used to ride in the bed of my truck, but as she got older, she preferred riding up front with me. She was my driving partner and my buddy. Did I mention, she LOVED to growl at other dogs and people she didn't know? 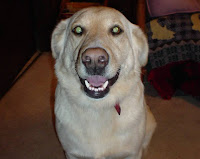 A few years ago, her eyes started fading and she began having trouble getting up and down stairs. We started giving her an aspirin every day to ease the pain. Eventually though, the years caught up with her and it was "her time" to go. Earlier this year, she lost her appetite, but perked up after some medicine. About a week ago, she went downhill again. This time we found out she had cancer. She still remained a fighter though. When she was put to sleep this morning, she didn't have a last breath or gasp. Her last sound was one last, fierce GROWL! Even though her body failed her, her personality and her loyalty remained unchanged until the end. It's so hard to say, but Good Bye girl. You've been a good girl. You were not only the best dog I ever had, you were also one of the best friends I ever had!
Posted by Lew Jetton at 6:00 PM 4 comments:

Some of my favorite Soul Classics....but not all, by any means:

Delany and Bonnie first called it the "Groupie Song" But "Superstar" turned into a big hit. My favorite version is by Luther Vandross.

Another of my favorites, "Voyage To Atlantis" by the Isley Brothers. One of the best shows I ever saw was Ronald and Ernie together. They'll be together again as soon as Ronald is free and I can't wait to see them again.

Until then, Ernie is still the closest thing I've seen to Hendrix

I love The Sylistics. Betcha By Golly Wow....what a great song

Of course, I have to have my Al Green fix. He can take me to Soul School anytime!

Posted by Lew Jetton at 7:08 PM No comments: