A Break from The Stage 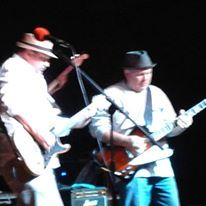 Didn't really plan it, but after a great weekend playing 2 really fun festivals, I'll be taking a break for a few weeks.  Friday night, we played the inaugural Beltline Blues Festival in Paducah, KY at The Riff, along with Bosco France, Stacy Mitchart, Scott Holt and Eddie Turner.  A great lineup!  I was especially thrilled Eddie Turner made his first visit to the area!  Been a big fan of his for years, and it's so cool with both of us having albums on the charts right now! 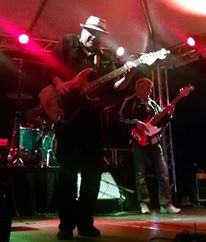 Saturday night it was the Beer, Blues and Brats Festival at Discovery Park of America in Union City, TN where we shared billing with longtime friends Little Boys Blue, who have been on the charts all summer long with their latest album.  It was great to catch up and also really enjoyed hearing them play live for the first time since we both played this event last year! Last year when we played this it was FREEZING, and while it was a little chilly this year, it was warmer.  The result was the crowd was HUGE! It was a special night.  Also, this past weekend, I was finally able to play the '79 Anniversary Strat for the entire shows.  This is the guitar which belonged to my late friend, Forrest Hurd of the Hurd Brothers Band.  It took some work, but we finally got it just like I wanted and it's incredible! 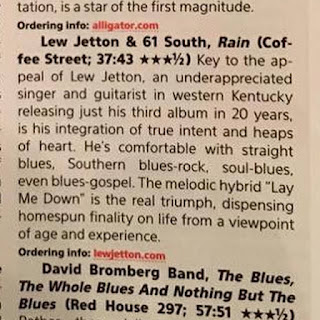 The new CD, Rain, continues to stay in the Top 25 Nationwide on the Roots Music Report's Contemporary Blues Chart!  The reviews have been really great too!  Just this week, an acquaintance sent me a clipping from DownBeat Magazine, which gave us a GREAT review!  What a THRILL!  We'll continue riding this out for as long as it last.  In the meantime, I'm getting ready for Christmas! That means recording a Christmas EP and getting ready for Christmas shows in December!  I'm sorry! ALL of them are private shows, BUT if that changes, I'll let you know!

It's hard to believe but the new CD, Rain, is  closing in on 2 months on the Blues Radio Charts! What is still most amazing to me is that ALL 10 of the songs on the CD have been played by stations, and EIGHT of the songs have charted on the Singles Charts!  Needless to say, we're thrilled with it's success. 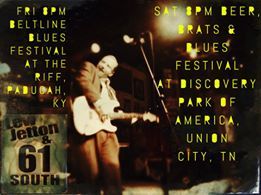 We'll be playing songs from the new album at 2 really cool festivals this weekend:  Friday night, we'll play at the inaugural Beltline Blues Festival at The Riff Concert Hall in Paducah, KY, along with one of my favorite guitar players, Bosco France.

Saturday night, we're at Discovery Park of America in Union City, Tennessee for the Beer, Blues and Brats Festival.  We played this event last year and it was a blast, with lots of craft breweries from around the state and region, and great food!!! We'll also be performing alongside our longtime friends, Little Boys Blue! It's been a great year for both of us!  LBB has been on the charts for 5 months now with their new release! 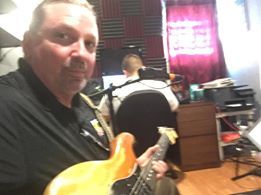 After this, we'll have a break from shows until December, then it's time for Christmas shows and parties.  That will be fun and especially this year because, I hope to have a Christmas EP out in time for the holidays!  Recording has begun and is moving along nicely!  Still undecided whether it will be a strictly digital release or not, but it will have at least 2 original Christmas songs, along with 4 or 5 classic Christmas songs.  Stay tuned!   Of course, beginning later this month, we'll
step it up, booking for next year!  If you would like to book us for your festival or other event, contact us here!
Posted by Lew Jetton at 9:05 AM No comments: