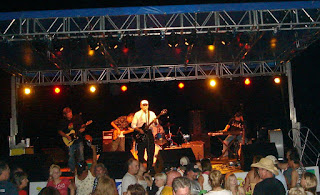 Although Labor Day may be the unofficial end to summer, for many of us, it's the Hot August Blues Festival at Kenlake State Park in Aurora, KY. We've been blessed to have played this festival 15 years running, and each year is more fun than the last as we visit with so many friends we've made from all over the nation at this festival over the years, and make new friends. We headlined the event Friday night and had a blast. Mark Barnhill, from Nashville, who used to play in bands with Sam, Greg and Danny years ago in Paducah came up and jammed with us. Jamie sat in on bass for a few numbers. It was HOT! At least a 5 pounder. (how much weight I lost during the set) 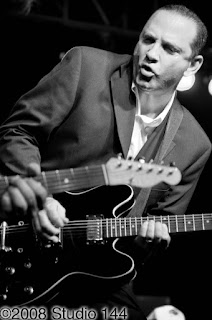 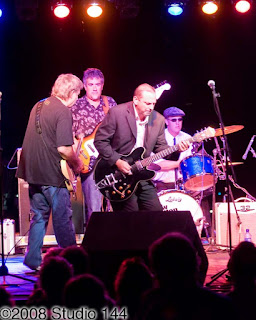 (Photos: Wm Gross Magee)
Prior to our set, Debbie, her daughter and granddaughter presented me with a huge birthday card signed by many of the fans at the festival, and a huge cake! I was blown away, as it was a total surprise. My birthday is the 23rd and we always joke that the Hot August Festival is my annual 39th birthday party! 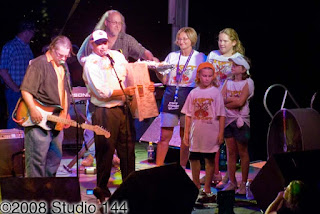 Saturday was time for fun as I got to sit back with my buddies and listen to the other bands. My favorite was Scott Holt. I appeared at a festival on the same bill as Scott a few years ago, and had seen him umpteen years ago when he played with Buddy Guy. He's lost all his hair, but still has his chops! (I'm way behind him in the chops department, but closing in rapidly in the hair department) He even stopped by for a pic during his "guitar walk." 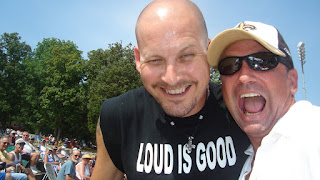 One of the bands Saturday, Flashback, from Jackson, TN, included Julie Rhodes, a talented keyboard player/singer who I remembered from when she worked in radio and I worked in TV in Jackson years ago. She didn't remember me, but that's understandable since it was almost 20 years ago, and I was pretty much forgettable in those days! (maybe still am!) They did a good job though and it was nice to see a band from my native West Tennessee! Later, my friends from the Bluesberry Blues band from Jackson came on and did a GREAT job, too. 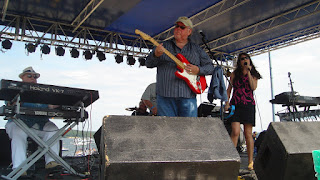 My friend Sharon stopped by to show me she STILL has the tattoo on her leg featuring a line from one of my songs. It's a good song, "State Line Blues," but I'm not sure I even like it that much. Maybe it's just the pain thing. 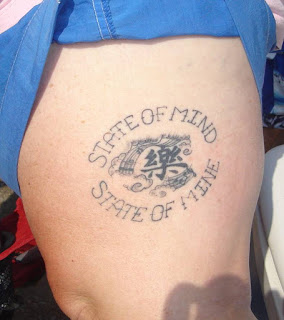 Speaking of tattoos, I got some sad news. For many years, everytime we played this festival, one of our biggest fans, Deborah, came running up to me to get her picture made and she would dance, and dance while we played. She was a true free spirit, covered in tattoos on the outside, and love on the inside. She was the inspiration for our song, "Tattoo Blues." Three years ago, she didn't show up. The next year, when she didn't show up, we tried to call around and ask to see if she was ok, but no luck. This year, I didn't see her, but I saw her husband, and asked about her. He told me she took sick 3 years ago, and then passed away last year. It was his first time back to a blues festival. He said it was tough. He said every year when they came to the festival there were only 2 people she HAD to have her picture made with: Me and Big Mike Griffin. I told him we had been worried and wondering about her and that we'd remember him in our thoughts and prayers, and told him we missed her very, very much. Rest in peace, Deborah! You are missed, you are loved and you are remembered.

It was so good to see other friends, like Amy Carraway. She's a great gal who really puts a lot of time in on Hot August, and always has a wonderful smile and encouraging word. 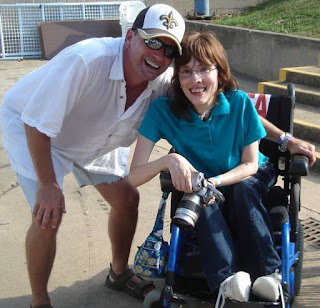 And then there's my friend and associate, Ned G. Gunn.....who won the Charles Nelson Reilly look alike contest, the dance contest, and the cherry bomb contest, among others.... Ned's wife, Carla is perfect for him. Any other woman would have given him the "burning bed" treatment by now..... I love how she takes a long, slow drag off a cigarette, turns her head, and tells him to "shut up," to which he replies, "I know you love me baby, now eat your corn dog." 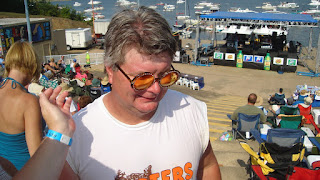 Brett Favre is Bigger Than Ever, Rolling Stone is Smaller

Brett Favre is bigger than ever in the Big Apple, but will he be a big bust? I think so. As much as I love Brett Favre, he's got a lot to overcome. Submitted for your approval, the following facts:

1. Favre's going to a less talented team than the Packers. His new receivers aren't as good as his Packer receivers, and more importantly, the defense backing him up with the Jets isn't as good as the Packers D he leaves behind.

2. Favre's not in shape like he was heading into his great season last year. He spent most of the off-season "retired" and living easy. Maybe not totally easy, but certainly not working out as hard as he did last off-season.

3. Favre's learning a new offense. The terminology may be the biggest change, but NFL offenses are complicated with small differences which can, in the end, make a big difference on coverages. The difference between winning and losing in the NFL is a razor's edge, and a little miscommunication can lead to a big blunder.

4. Favre's on the cover of the Madden '08 video game. The kiss of death for a productive season.

5. Favre is the New York Media darling for the moment. That's about as long as anyone stays the media darling in New York.....a brief moment.

*The Favre-Packer divorce could not have been handled worse. Who's to blame??? BOTH. The Packers should have known Favre would waffle on his "retirement" and Favre himself should have known he would waffle on his "retirement." I think the Packers just got tired of the waffling. Aaron Rogers has a lot of potential, but he's not Brett Favre, and may/will never be. Favre was the Packers best chance to make it to the Super Bowl this year. Now they won't, and Favre won't either, with the Jets. With Rogers, the Packers may make it next year, or the year after that, but this is a "win now" league. How sad that Favre's Packer history had to end this way, the the blame for that lies mostly with Favre himself.

Also catching my eye this week, Rolling Stone Magazine is getting smaller. For so many years, Rolling Stone has been a large-paged magazine, known for it's insight, it's connection with 40 and under Americans (and those 40 and younger at heart), it's cutting edge journalism and it's great photography. I think it still will be. Some of my favorite reading growing up was found in Rolling Stone, including pieces by one of my favorite writers, Hunter S. Thompson. There was a bit of a lull for a few years, but RS "came back" to some degree, and still is a powerful, cultural presence. Though the format might change, the content should be unaffected. Like many magazines and newspapers, Rolling Stone has seen ad revenues continue downward, but as long as they remain true to their principles and their vision, they should remain a force for a long time.
Posted by Lew Jetton at 6:35 PM No comments:

We played at the 128th Annual Fancy Farm Picnic at Fancy Farm, Kentucky. We've played this wonderful fundraiser for St. Jerome Parish before, where they're famous for their BBQ and for their traditional "political speaking." It's old fashioned politics at it's best, as candidates take the "stump" (stage) to speak to voters under a hot August sun. Many nationwide political figures in the past have made their way to this quiet little community to take part in the tradition, including Al Gore, as thousands gather for the food and the "speaking."

(Photos by Wm Gross Magee)
We provide the music, and have a wonderful time doing so, as the folks are simply the best! I must admit though, for all the years we've played it, I've NEVER had the BBQ, as when we played on Friday night, it was still cooking, and when we arrived in Saturday to play, it was already sold out! This year, I decided to eat before I went, so of course, when I arrived, they still had a little BBQ! My loss. Everyone said it was fantastic as they slow cook it the old fashioned way and numerous pits.....tons of it. When we've played on Friday night the Knights of Columbus have a huge fish fry, and I HAVE had that. It's wonderful too!

(Photos by Wm Gross Magee)
It was HOT.....with heat indices more than 100, but everyone took the heat in stride. The Fancy Farm High School Class of 1978 held their reunion, so we played some 70s music, just for them and it was fun all the way around. Our buddy, Charlie did sound and he always does a great job! I played the 335 through the Twin and got a good tone. I've had voice issues the past month or so, but with the hot weather had some of the Fancy Farm Lemonade this night. I think it helped. It was great to see Bill and Shirley there from South Fulton, TN. They're coming up on their 55th wedding anniversary and try to make almost all our shows, which truly humbles us. We always try to play what they want and do our best.

Next year.....I pledge to hold off, in hopes of nabbing some of that BBQ!
Posted by Lew Jetton at 9:43 PM No comments: