How I Got The Idea To Form 61 South

When did I get the idea to form 61 South??? I Didn't!!! Many people are surprised when I tell them I didn't form the band and I was NOT an original member! 61 South was the brainchild of "Fast Layne" Hendrickson and the original members were Layne, JD Wilkes, Erik Eicholtz, Jonas, Jeff Statler. This was the early 1990s. Fascinated by blues' beginnings, Fast Layne played in all open tunings and JD was a talented young harmonica player. Erik had switched to drums from guitar and was playing up a storm.

The band began gigging and developed a local following. Later, they added Moody Burke on guitar. Moody was a fantastic guitar player and "old school Blues" disciple. When Moody decided to leave the band, Layne recruited me as a guitar player. I admit, I found this odd as I was and am a horrible guitar player, but I love the Blues and always wanted to be in a blues band!

In 1995, Layne decided to split for New Orleans. That meant the band didn't have a singer and front man. Even though I was an even worse singer than guitar player, I was drafted and did the best I could with what little talent God blessed me with. We just wanted to keep playing the music we loved. The 15 years since have been a wild ride at times and a fun time always. We never use a set list. We play what we want to when we or you want to. Sometimes if someone wants to hear a song we've never practiced....we try to play it. It's total ad lib and spontaneity. That means sometimes it's beautiful, and sometimes, it's a train wreck, but it's ALWAYS from the HEART and it's always fun.

We've been through a lot 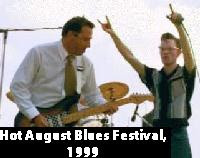 of members over the years but the current lineup has been in place for about 10 years with the exception of Danny Bell, who we were thrilled to bring in a few years ago. Erik is the only original member left, although any and all former members are STILL considered to be part of 61 South and have returned on occasion for a gig or two and some fun. Although JD left the band years ago to form the Legendary Shack Shakers, he still returns occasionally when his schedule allows and we LOVE playing with him. Layne's come back to play with us too . What a fun time. Erik's still the last man standing. I'm so glad Layne thought of, and formed 61 South years ago. It's helped me through so many rough times in the years since. I don't know how long I can do it, but I know I need to for as long as I can. In so many ways, it keeps me alive and growing, especially spiritually, in the Blues.
Posted by Lew Jetton at 5:18 PM

Lew, while technically you may not be a great guitar player, you underestimate your abilities considerably. You have style, something few players possess. The show that I saw in Missouri will always stay with me. Your energy and showmanship go far beyond being a guitar hero like Page or Clapton.

I can't tell you how badly I want Tatyana to see you and the boys sometime. You would blow her mind. Thanks for some wonderful memories... may there be more to come.