Hurricane Ike wasn't too kind to the Texas Gulf Coast and the remnants weren't too nice to us! I don't have an accurate measure of the wind gusts at my house, but there were high enough to bring down a number of big limbs and kill our power for most of the day and night. Was it a Tropical Storm when moved through the area? Not officially, but the gusts were something else!

The following are some of the highest measured wind gusts (unofficial) reported to the NWS office: 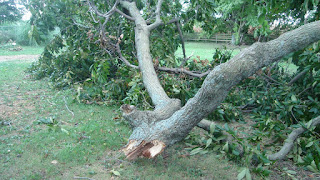 I'm thankful that our home suffered no damage, although I banged my already broken toe while trying to clean up limbs. OUCH! I also lost a Sunday's worth of NFL Sunday Ticket on TV and a chance to grab Darrin Sproles of the San Diego Chargers for my NFL Fantasy team. I would have too! But that pales in comparison to what others lost and for that I am thankful, while offering my prayers to them and their families.
Posted by Lew Jetton at 3:04 PM