We Miss Ya, Glenn 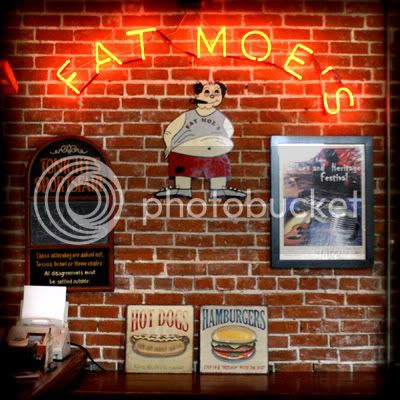 I'll never forget, when Fat Moe's first opened in Paducah, someone said something to me about playing there. I went to "check it out" and thought it was such a cool place! I loved the old record album covers and instruments around the walls. The stage was SO small. I didn't think I could fit the band on there.....but we squeezed in there and played the night away. The food was great, too, but one thing that struck me more than almost anywhere I'd ever played, was how genuine and sweet Glenn and Mary Jordan were. Their personalities gave the place a special atmosphere that just makes you feel welcome and like family. In the years that followed, it became one of our favorite places, if not THE favorite club we played. I would often get off work, then head over to Moe's to kill time before the gig. I usually spent that time enjoying a Fat Moe Burger at the bar, and many times shared a stool next to Glenn. It was always a treat. We'd talk about anything and everything. He was always asking me about the TV Biz & Meteorology, then the Transit Biz, and always the Music Biz. His wit and wisdom always brought a smile to my face.

He had his share of health troubles recently, but the sudden passing of Glenn came as a shock when I heard about it Monday. His family called that afternoon, and asked if I could play and sing at his service. They said we were his favorites. There's no way I could refuse. He was one of our favorite persons, too. We decided I should sing one of his favorite songs we played, "Funny How Time Slips Away." It's a wonderful song, but I decided to change the words just a little bit. Instead of singing the original lyrics about an old, spurned love, I decided to change them to reflect how quickly this time on Earth passes with those we love, and how we should keep that in mind, and always treasure the time we have with our loved ones. I hope I did him proud, because he sure deserved it. For the record, he also really liked "Waffle House Woman"!! Local Attorney Tod Megibow and Pastor Don Young did wonderful jobs with the eulogy and the message. That's right, a Jewish lawyer, a Baptist preacher, and a blues singer! That just goes to show you the range of lives he touched. Glenn loved live music in his place, and we loved playing our best for him. Mary said he remarked that we got better every time we played there. Maybe part of that had to do with the environment of Fat Moe's and the love in that place.

I won't pretend that we were best friends, but we became friends over the years. I think just about everybody who got within an arms reach of Glenn became his friend in no time! I learned more about him after his passing, such as how he doted over his grandkids and supported them. How good his kids all turned out, and how much they all loved him. I wasn't surprised.

Say a prayer for Mary and the kids and the grandkids. They could use it. He was at heart, one of the good guys, and it's always sad to lose one of them, because there aren't as many as there used to be. I have a feeling, though, his spirit will live on at Moe's, forever.
Posted by Lew Jetton at 3:34 AM

Lew,
I cannot express to you how much reading your blog meant to me. I will pass it on to the rest of the family.
Much love,
Kelly Jordan Pace

Lew,
Thank you so much for your wonderful blog. Reading such kind words about Dad put a smile on my face during this sad time. Your rendition of "Funny How Time Slips Away" during the service was awesome. I know he was looking down and saying "I told you, he just gets better". Thanks for being a friend to he and Mom.
Tina Jordan Martin

Lew,
Words can not express what it meant to my family and myself that you sang at Glenn's service. You picked the perfect song for Glenn and did it beautifully. Thank you for the kind words they brought tears of happiness. Glenn and I always looked forward to having you perform at Fat Moe's. Your kindness will always be remembered!
Much love,
Mary Jordan