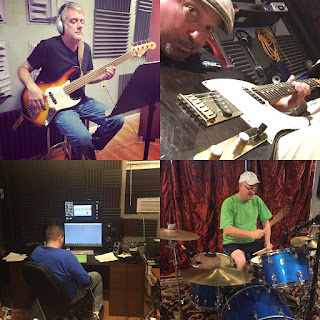 I knew when I walked in the Coffee Street Records Studio in Reidland, Kentucky for us to begin recording Palestine blues, there were not going to be a lot of effects  or for that matter even overdubbing. When we had rehearsed the songs three-piece to work them up with the rhythm section, the songs already sounded so good,  I decided to go ahead and just stay with the three piece all the way through the recording. That's just the way the message of the songs came though the best.

I did use several guitars to achieve what I wanted to on the songs and to be honest I don't know if I can remember all of the guitars used! Here are the ones I remember: A Gresh Brian Setzer Edition, a Paul Reed Smith 30th anniversary,  G&L Bluesboy, Fender Blacktop Jaguar, 79 anniversary Strat which want to belonged to a friend of mine, Forrest Hurd, a Phil Jones/Steve Uncapher Lower Broadcaster, a custom telecaster which was built for me by a friend, Brian Campell, and an Eric Clapton Blackie. 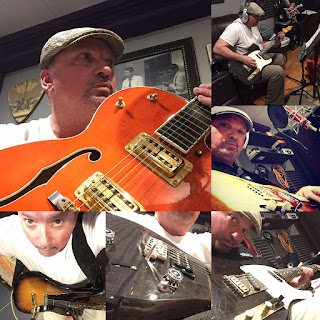 Throughout the entire album, I did not use many FX at all. I think all I used was a Fulltone OCD and a Boss Tremolo.  Any other affects were done downstream  in ProTools.

Really, the only time I remember trying to stretch for a little bit of an unusual tone, was on Don't Need No Devil," when I was applying some techniques which I had seen Daniel Lanois do. I always liked how he got such ethereal tones.

So that's it. Kept it really simple. Did not want a lot of layering or effects getting in the way of the songs messages.  Sometimes, "less is more," and I think it really was on this project. I enjoyed it so much, I think I'll continue keeping things uber simple!